How Does a Kegerator Work?

Most people, at some point in their lives, will know what it’s like to pour beer from a keg. Sometimes the keg lets the beer drip out slowly, sometimes it blasts foam into the cup, and sometimes it pours just the way you want it.

Although a lot of good anecdotes might come out of beer kegs, it doesn’t change the fact that it’s not an optimal way to dispense beer. If not done properly, pouring beer via a keg pump can lead to poor quality drinks and wasted alcohol.

In this blog, we’re going to discuss the best solution to this problem: the kegerator. We’ll talk about how a kegerator works, how it’s maintained and its general benefits.

The Main Components of a Kegerator

The term ‘kegerator’ is a portmanteau of ‘keg’ and ‘refrigerator’. Though it’s commonly used with beer, it can also be used for other types of beverages such as soda, cider and even some types of cold coffee.

At its essence, a kegerator is a fridge that holds a keg inside of it. That being said, it also has a dozen other features that make it a must-have for both home brewers and drinkers.

One of the most important parts of a kegerator is the cabinet. This is the refrigerated container that houses the beer keg. It’s usually smaller than a regular refrigerator but can often store more than one keg at a time.

Sometimes, people even repurpose old refrigerators into modified kegerators to save money.

On top of the cabinet is the draft tower, the faucet and the faucet lever. The draft tower acts as the halfway point between the keg and the outlet. It’s where the beer sits, waiting to be dispensed via the faucet.

The faucet itself can come in different styles and shapes. Depending on the shape of the faucet, the way you pour your beer might vary. Finally, there’s the faucet lever. This is the handle that you pull to pour the beer. The lever is often customised to suit a particular aesthetic.

The top surface of the cabinet also has a guard rail to prevent glasses from falling sides and a drip tray to collect the spills of beer.

The CO2 tank is responsible for keeping the appropriate amount of pressure within the keg at all times. The pressure built up by the CO2 is what pushes the beer up to the draft tower and out the faucet. It’s also what allows you to consistently pour freshly carbonated beer from your kegerator.

Through the CO2 regulator, you will be able to adjust the pressure when necessary.

Last but not least, there are also the hose clamps. These are used to ensure that both the gas and beer lines are properly attached to the keg. 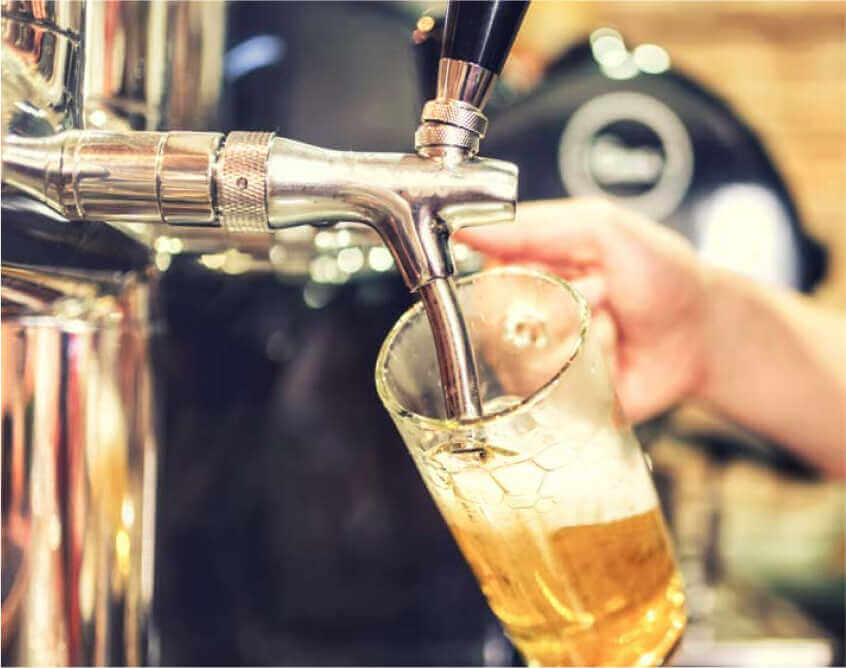 Kegerators are extremely safe to use, even in non-commercial settings. However, due to the use of pressurised CO2, you still need to take precautions.

For example, once the CO2 tanks are refilled, you need to make sure that they are sitting upright so as not to break the gas regulator. If you’re transporting CO2 tanks over a long distance, you run the risk of breaking the regulator in transit. Once the regulator breaks, there’s a good chance that your tank will rocket into the far distance.

Because of this, you should always fill CO2 tanks locally. They can be filled at brewing shops, paintball stores or welding shops.

When replacing the keg, it’s important to remember to close the CO2 tank first. Though CO2 isn’t as dangerous as other gases, too much of it can still cause dizziness and headaches.

Lastly, you also need to make sure that the gas and beer lines are cleaned regularly. If you don’t, harmful bacteria will begin to grow inside of the system, making the beer unsafe to drink. At the very least, it’s going to affect the quality and shelf life of the beer.

Benefits of Having a Kegerator

If you’re still not convinced here are a few benefits of having your very own kegerator:

There you have it, your crash course on the kegerator. Hopefully, this has helped you better understand how a kegerator works and how it can help you with your brewing and drinking needs. If you have any questions, make sure to contact your local brewery.

Software for Startups: How to Jumpstart your Productivity

4 of The Most Overlooked Parts of Your Kitchen

What to Consider Before Buying a Trampoline

What is Single-Origin Coffee?

6 Reasons to Reduce Your Coffee Intake

How to Encourage The Kids to Play Outside

How to Match a Men’s Belt With Your...

How to Get the Longest Life from Your...

Can CBD Oil Improve Your Sleep?

Buying a Second-hand Boat? Here’s What You Need...

Where to Sell Antiques, Heirlooms and Unwanted...

Where to Buy Spare Car Parts