What You Need to Know Before Getting into Yoga

Yoga is a set of practices and disciplines that aim to improve one’s overall health. Nowadays, yoga is considered to be one of the most popular forms of exercise in the western world.

In order to get the most out of your yoga experience, it’s important to understand its physical, mental and spiritual aspects. It also helps to know a little bit about its historical background and religious roots. On the more practical side of things, it’s also beneficial to be aware of the various types of yoga accessories that you’ll need like cork blocks and heat packs.

In this blog, we’re going to discuss a few key things that you need to know about yoga as a beginner.

A brief history of yoga

Yoga has roots in ancient India and was originally designed as a method of bringing harmony to the mind and body. Some yogic scriptures also suggest that yoga is able to connect our individual consciousness to the larger universal consciousness. The main goal of this practice is to control the mind and detach it from duhkha, a Sanskrit concept which can be roughly translated as ‘suffering’.

This spiritually-focused practice, which has ties with Hinduism, Buddhism and Jainism, is considered to be traditional yoga.

As yoga became more popular in the Western world, the practice began to take on a different form. The idea of ‘yoga as exercise’ became prevalent in western populations and, subsequently, yoga’s religious implications began to fade.

In the west, there was a lot more focus on asanas (body postures and meditation poses) and their physical health benefits. This type of yoga is sometimes called modern postural yoga.

To this day, both forms of yoga are still widely practiced. As a beginner, it’s important that you think about what you want out of yoga. If you’re after a spiritual experience, then consider the more traditional forms of yoga. If you want something a little more casual, go with modern yoga practices. 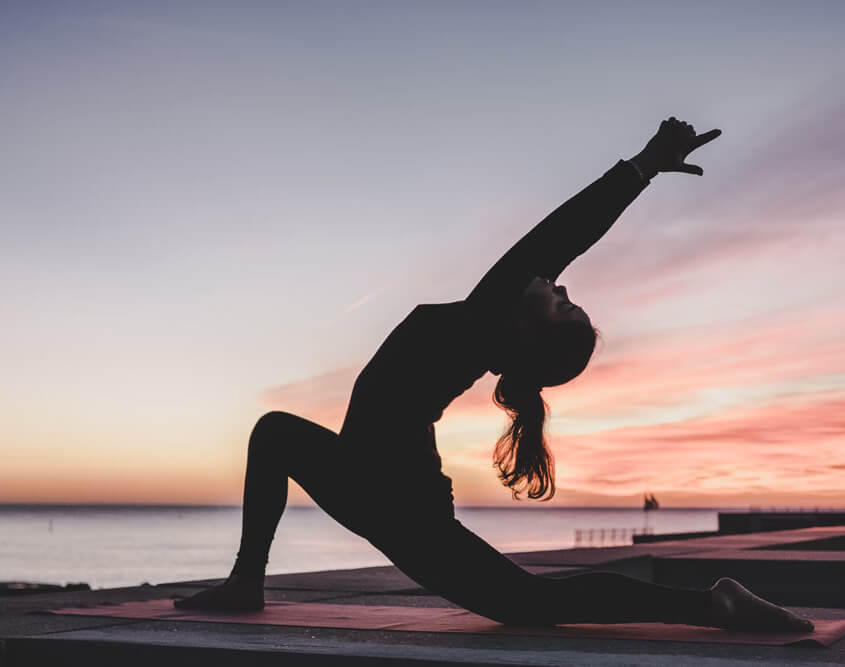 According to the National Center for Complementary and Integrative Health, the body postures, breathing techniques and meditation techniques involved in yoga may have a variety of health benefits.

Yoga may be able to help you with:

Keep in mind that, besides traditional and modern yoga, there are plenty of other iterations of the practice. Some yoga styles are gentler on the body, while others are more taxing. Depending on the style that you go with, you may experience different results.

To get the best yoga experience, make sure that you have all the accessories and equipment that you need.

Here are some of the items that you may want to buy:

Unfortunately, due to the popularity of yoga, a lot of companies nowadays are manufacturing a whole range of yoga products from non-biodegradable materials. This includes PER (Polymer Environmental Resin), TPE (Thermoplastic Elastomer) and EVA (Ethylene-Vinyl Acetate).

If you’re just getting into yoga, it’s best that you buy products from environmentally conscious companies. Eco-friendly yoga accessories are often made of cork, natural rubber or jute.

Hopefully, this helped you better understand the practice of yoga. In addition to its spiritual offerings, yoga is also a great way to stay mentally and physically fit. Regardless of your outlook on life, yoga can benefit multiple aspects of your well-being.

Porcelain Veneers: What They Are and When You Need Them

Porcelain Veneers: What They Are and When You...

How to Revent Back Problems

5 Common Baby Skin Problems and How to...

What You Need to Know About Wisdom Teeth...

CBD Oil and Pain Relief: Does it Work?

Child Counsellors – What They Do and How...

Why you should Filter Cooking Oil

CBD Oil and Pain Relief: Does it...